Difference between revisions of "Critical Hits"

Every hit that damages internal structure has a chance to do additional critical damage ("crits"). Before adjustment due to skill tree, weapon properties and equipement (i.e., targeting computers) - for every hit there is a:

This chance to critically hit will also occur if only part of an attack hits the internal structure. For example if there is 9 armor remaining in a section that is hit by a 10 damage attack, that hit will trigger a critical hit roll for the full damage value of 10. If the full damage of the weapon is reduced (for example - due to long range), the crit uses the reduced damage.

The first effect of critical hits is bonus damage to the internal structure. There is a 15% increase in damage multiplied by the number of crits.

The second effect of critical hits is damage to components within the location. For every crit a randomly determined component within the location is damaged. The odds depend on the number of slots occupied in the location, thus larger components have a greater chance to be damaged. Empty slots and slots occupied by endo-steel structure, ferro-fibrous armor (normal or light), CASE and stealth armor are not included in the calculation. Slots for components destroyed by previous critical hits are treated as empty and no longer affect the selection. 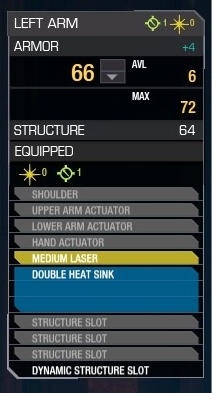 Example: Figure 1 zooms in on the left arm of an IS 'Mech. Arms have 12 critical slots. The fixed components (shoulder, upper arm actuator, lower arm actuator and hand actuator) and medium laser occupy one slot each. The double heat sink occupies three slots. The structure slots are ignored for critical damage chances. Thus, for crit damage calculations there are eight slots. The single slot components each have a 12.5% chance (1/8) to be damaged, and the double heat sink has a 37.5% (3/8) chance to be damaged.

Once a component is destroyed all of its slots are considered empty, thus critical damage chances for the surviving components increase.

Fixed components and engines absorb critical hits, negating the effect of component damage. Every weapon, ammunition bin and piece of equipment has its own health pool, which is reduced when it receives critical damage. When that health pool is depleted the component is destroyed and ceases to function. If the critical hit has more component damage than is required to destroy a component that damage does not transfer to any other target and is lost. An empty ammunition bin still receives damage, but has no chance to explode with destroyed.

If there is ammunition within a location when the location is destroyed, there is the same chance for it to explode as if each ammunition bin was directly destroyed by critical damage.