Difference between revisions of "Game Modes" 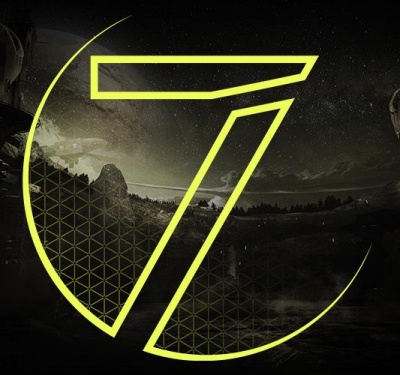 Solaris is a 1v1 and 2v2 arena combat expansion for MechWarrior Online! Drawing from BattleTech lore, the idea behind Solaris fits perfectly for MWO in terms of gladiatorial combat.

It features leader boards and a reward structure completely new to MWO and not related to Quick Play or Faction Play. Anyone can participate in the Solaris Games, for both the 1 vs 1 and 2 vs 2 Divisions. Before participating in the Solaris 7 Games however, players must first select a Patron for the Division they wish to play in. Divisions differ from each other in terms of the 'Mechs allowed to be used in combat. For example, 'Mechs in Division 1 cannot be used in combat against 'Mechs in Division 2.

Two players will face off in a classic death-match game mode. The winning MechWarrior will be the last one standing on the battlefield. If the timer runs out and neither players is defeated, the match will result in a tie.

Two teams, each consisting of 2 players, will face off against each other with the victorious team being the one with the most remaining team members at the end of the match. This means that if only 1 player is defeated when the timer runs out, the team with both players active will receive the win. If the timer has run out before any players on either team have been destroyed, the match is considered a tie. There is no need to register a team for Solaris. Solaris teams are considered casual groups and all stats are assigned to the individual players, not the group itself 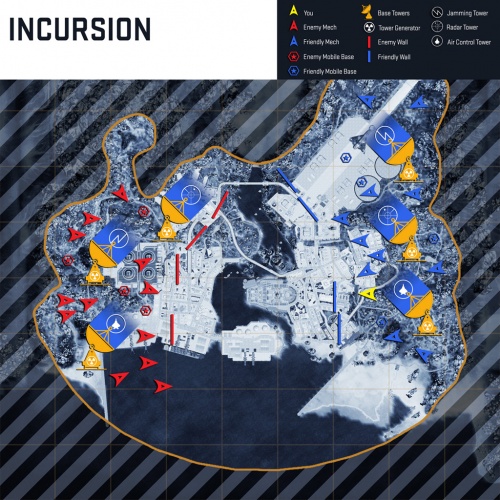 To secure victory players in the Incursion Game Mode pilots must ensure the integrity of their Team Base, contending for essential Fuel Cell Supply Points to power key Support Towers for use in the fight against the Enemy forces and their Base. 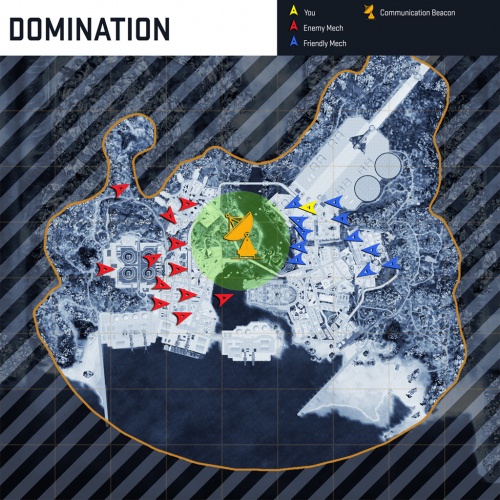 The primary goal of Domination is to claim control of the central Communications Beacon. Each team will start a game of Domination with a team countdown timer set at 1 minute. To complete the objective and emerge victorious your team must hold the Communication Beacon for a total duration of 1 minute throughout the course of the match. The first team to reach 0:00 will be the victor. 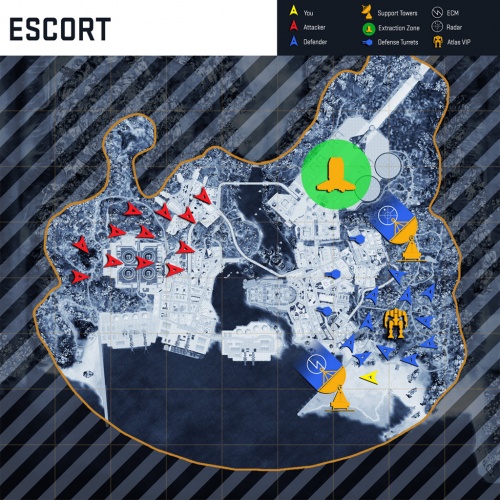 Escort is an asymmetric Game Mode for Quick Play. Teams are assigned the role of either the Attacker or the Defender, with separate objectives and win conditions for each side.

The Defenders must ensure that the AI-controlled, ECM-equipped Atlas VIP reaches its destination at the Extraction Zone in time for extraction.

The Attackers must do whatever they can to stop the Defenders from achieving this goal. 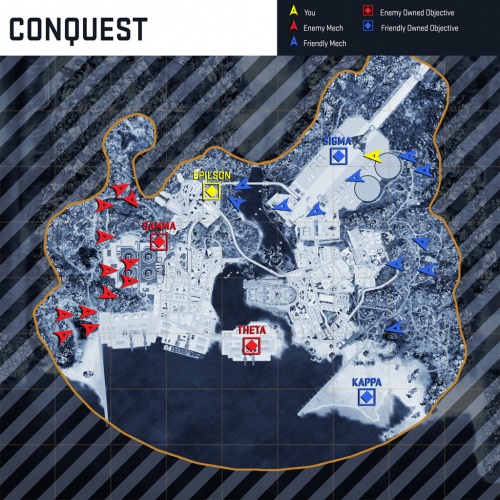 The primary goal of Conquest is to claim control of the Capture Zones scattered throughout the map. Each Capture Zone under your control provides your Team with Resource Points, at the rate of one Resource Point per second, per Capture Zone. The more Capture Zones your Team controls, the faster you'll ensure victory. Teams who focus too greatly on combat do so at great risk; a well-coordinated Lance of Light 'Mechs can easily snatch victory from an enemy too focused on sheer firepower. 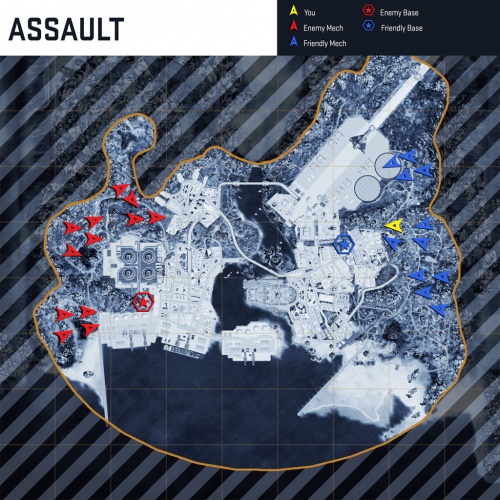 Assault challenges each Team to capture the enemy base, while simultaneously protecting their own. Teams looking to achieve victory through a base capture will need to divide and conquer; a well-armed diversionary force can mount a convincing distraction to draw the enemy's attention, while your faster 'Mechs go for the base capture. Mixing and matching complementary roles, feinting tactics, and effective communication are all key to winning an Assault match through tactical means. However, when tactics fail, brute force can still turn the tide. 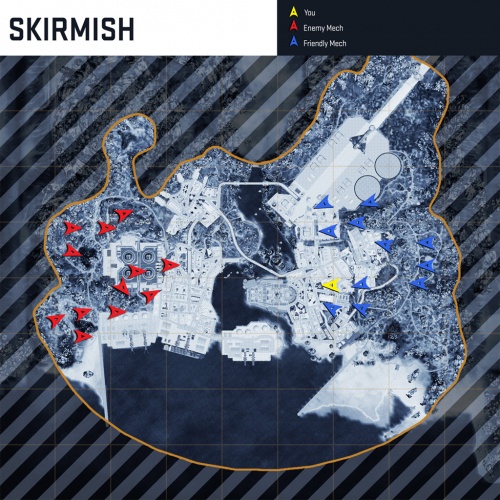 Skirmish is 'Mech warfare at its most simple. Skirmish contains no side-objectives; no bases to capture, no resources to collect. There is only combat. Scouts and Support 'Mechs may shift their attention toward locating enemy forces or wearing them down at long range, while Brawler and Assault 'Mechs may focus their immense firepower to crush the front line and scatter the ranks. Whatever strategies are employed to achieve it, there is only one simple goal: total annihilation. 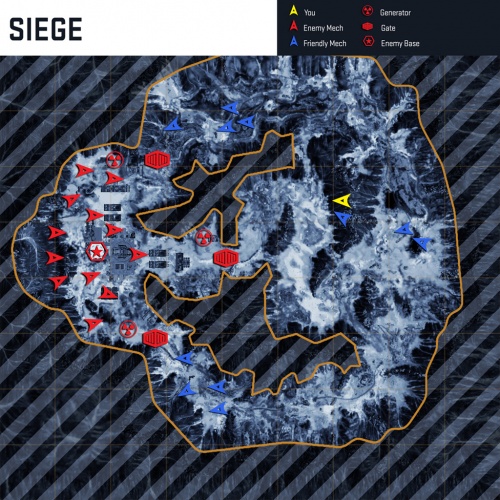 Siege represents the initial moments of a planetary invasion, where attackers look to cripple their enemies' orbital defenses in advance of the full invasion force. To accomplish their objective attackers will first need to penetrate the massive blast doors that protect the base. Built by the ancient Star League specifically to keep 'Mechs at bay, the doors can only be forced open by destroying the nearby generators that power them.

Once beyond the gates the attackers must destroy the three generators within the base that power the Space Defense System's massive Naval Gauss Cannon. When the three generators have been destroyed, the backup power system in the SDS gun goes online to maintain full operation, opening its blast doors to vent the excess heat at the cost of leaving it vulnerable to direct attack. Upon destroying the SDS power system the attackers have achieved victory, and will be able to continue the invasion unimpeded.

Attackers can increase the odds of victory for their Faction in the Siege game mode by launching missions in the Scouting game mode prior to the Siege.

In the Siege Counter Attack game mode the planet's previous defenders must now go on the offensive as the attackers, and attempt to regain control of their base and the SDS located within. To achieve their goal the attackers must not only destroy the Enemy team, they must also destroy the Mobile Field Base they established to further coordinate their attempted invasion. 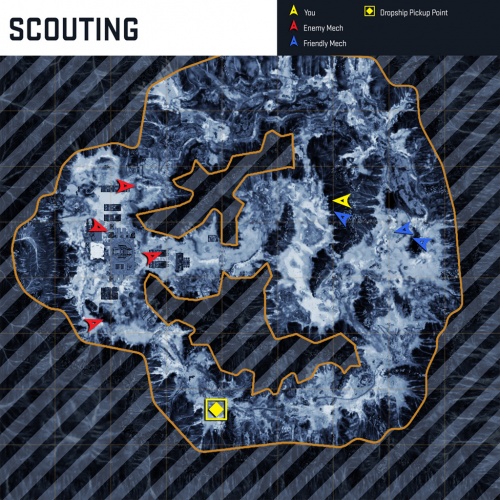 Unlike the 12v12 respawn system found in the Siege and Siege Counter Attack game modes, Scouting is a 4v4 single-spawn game mode focused on capturing or protecting Data Points.