Difference between revisions of "Interfaces"

The MWO non-battlefield interface has standard top and bottom menus.

Home - Takes you to the landing screen. See Mech Bay for more information.

Solaris - Duel for your Patrons. See Solaris for more information.

Quick Play - Launch into 12v12 battle by yourself or with a group. 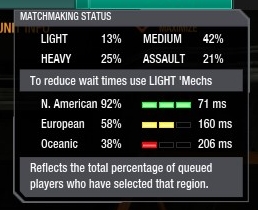 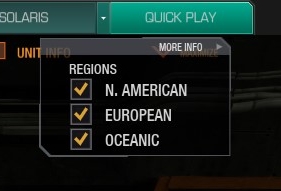 Hover over the Quick Play button to see game status information. Matchmaker Status shows you the percentage of 'Mech classes playing at that time. Below are the ping for each of the servers: North American, European and Oceanic. The above image was taken from the western coast of North America.

The small drop menu to the left of the Quick Play button tells MM which servers you are looking to play on. Only selecting the closest server may reduce your in-game latency, but may increase your wait time as MM creates matches.

Exit Game - Exits the game, or return to the MWO launcher.

Events - Launches the Events browser. View current, upcoming and past special events. Your status is updated after every match.

News - Re-launches the news and promotions window that displayed upon login.

Lists the names of players that either have accepted your friend invitation or you accepted their's. Listed in alphabetical order, online first.

Lists the names of players in your Unit. Listed in alphabetical order, online first.

Lists the social alerts you received, such as friend invitations, group invitations or lobby invitations.

Join the Looking For Group queue, which allows group leaders to find you. A good way to join a group if you are not already the group leader's friend or in their Unit.

Lists the names of players who you have blocked from chat communication.

Select one of the names in the Social window opens a sub-menu - send them a message, invite them to your unit, block them from chat, remove them from your friends list, or view their Solaris card. If you are the group or lobby leader you will also see the option to send them a group or lobby invitation. 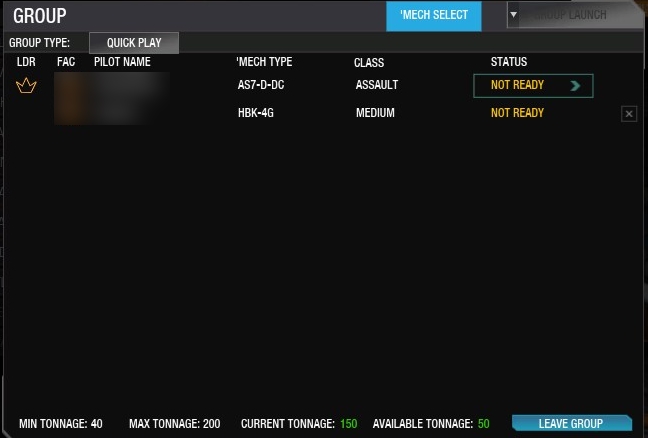 The above group has an Atlas assault 'Mech and a Hunchback medium 'Mech, so the group totals 150 tons. Within a Quick Play group there are combined tonnage limits that the group must stay within, and the limits change depending on the number of players within your group.

You cannot form an 11-player Quick Play group, as there are no solo players in the group queue to complete a 12-player team.

When each player in the group is ready to drop into the match they click the "Not Ready" button, changing their status to "Ready". The group leader, indicated by the "crown" at the left, can then select the Group Launch button. It has the same server select drop menu as Quick Play. The Mech Select button allows players to select a new 'Mech without leaving the group.

Groups are made this way for Quick Play, Faction Play and Solaris (two players maximum). Change the type of group with the Group Type at the top left of the group window. 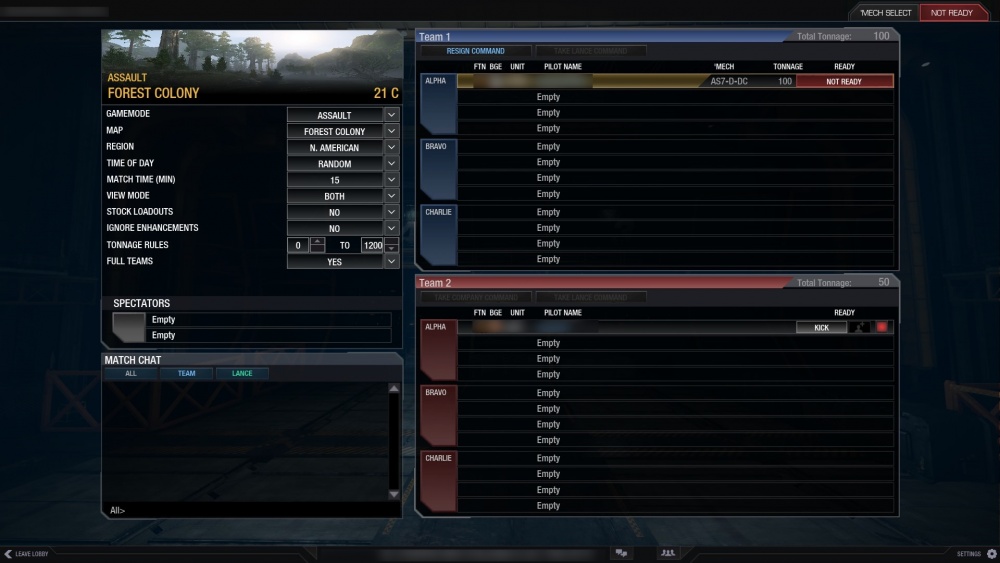