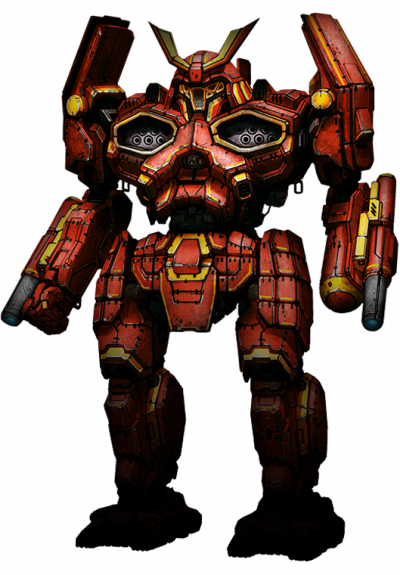 Welcome, MechWarriors! MechWarrior Online (MWO) is a tactical, 'Mech-based, massive multiplayer, first-person vehicle online shooter set within the lore of BattleTech. Here you can engage in 12-v-12 company-sized battles or 1-v-1 and 2-v-2 gladiatorial personal duels. This guide is intended to familiarize new players to MWO; no previous knowledge of BattleTech in its many forms is expected.

In MWO BattleMechs weigh between 20 and 100 tons, and fall into one of four weight classes:

Smaller 'Mechs are typically faster and more maneuverable than heavier 'Mechs, but heavier 'Mechs can carry more weaponry and equipment. MWO's match maker (MM) tries to keep the same number of each class of 'Mech on each team when setting up Quick Play matches. The standard composition for a match is 3/3/3/3 - three of each 'Mech class (light/medium/heavy/assault).

The BattleTech lore universe spans over five hundred years, and ever since the first BattleMech was built in 2439 (the "Mackie") hundreds of different 'Mech designs, or "chassis", were produced. MWO has over 100 different 'Mech chassis in-game, including Inner Sphere and Clan technology base. Each 'Mech chassis has several variants.

A BattleMech variant is a version of a 'Mech chassis with different hardpoint layout. Differences include weapon types and location, allowance for equipment such as electronic countermeasures (ECM) or anti-missile systems or the size of engines.

Typically 'Mech names start with their chassis followed by their variant. Each 'Mech chassis also has a nickname, and Hero variants have unique names.

Within MWO every player can freely change their 'Mech's configuration, so long as they follow certain rules. Such configurations are typically called "builds". A BattleMech is built by placing components within its eight internal locations: left, right and center torso; left and right arm; left and right leg and head (cockpit). Each location has a number of critical slots which hold components- six slots for the head and legs, twelve slots for all other locations. Components are weapons, ammunition, and equipment. Constraints to building a 'Mech include: 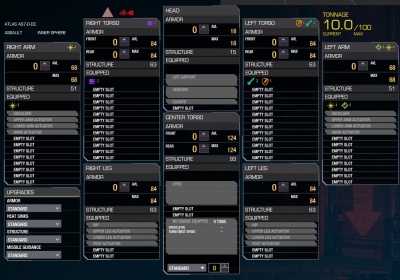 Within the Mech Lab each 'Mech is displayed as a schematic with every location's slots available for use. For example, Figure 1 shows a new Atlas AS7-D-DC. Stripped of all components and armor the 'Mech weighs only 10 tons due to its internal structure and fixed components (actuators, gyro, life support, sensors and cockpit). Its hardpoints are: 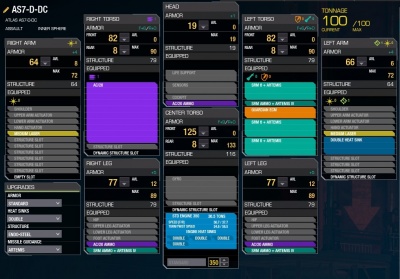 In addition, it has ammunition for the AC/20 and SRM/6s, double heat sinks and a standard engine 350. The SRM/6s have the Artemis option. To carry all this the player upgraded its structure to endo-steel, gaining tonnage but losing slots.

Certain Clan 'Mechs use "Omnimech" technology, which allows one 'Mech variant to use the locations (arm, leg, side torso or head) of another 'Mech variant of the same chassis. This allows a 'Mech to change its hardpoints.

While Inner Sphere and Clan BattleMechs differ in chassis design and component sizes/weight, a 'Mech will not be allowed on the battlefield without an engine, at least one weapon and at least 10 heat sinks.

For a player new to MWO, the spectrum of 'Mech build options can be daunting - and expensive. We recommend starting with the free Trial Champion 'Mechs. These are 'Mechs whose builds have been designed by the MWO community to fit certain play styles. Typically there are one Trial 'Mech for each class and technology base. You cannot edit the build or cosmetics of Trial 'Mechs, but your experience in that variant is recorded for use if you purchase it later.

Use Community resources to explore the different 'Mech builds for different situations and battlefield roles. Initially focus on a preferred class as you learn to configure your own 'Mechs.