Difference between revisions of "Skill Tree"

In May 2017 a "Skill Tree" system was introduced to MechWarrior Online. The Skill Tree provides a level of customization for 'Mech capabilities with a heavy focus toward 'Mech specialization.

The Skill Tree balances the cost-benefit ratio of the more heavily-desired skills. Tree Nodes are arranged in a non-linear fashion. This structure forces players to make real and impactful choices about how they approach the skill composition of their 'Mech. The nodes within the Skill Tree are arranged and balanced around the overall number of nodes it takes to maximize any given skill type.

An example with the "Weapon Cooldown" and "Weapon Heat Gen" Skill Nodes within the Firepower Tree. While containing different node counts, and wide distribution throughout the tree, the Cooldown and Heat Gen skill types require around 28 nodes of investment to maximize any one of those two skills. To achieve this you need to sacrifice 30% of your 91 total active skill point allotment for a 'Mech. Due to the non-linear arrangement of the tree, subsequent investments in other nodes becomes much more cost efficient. While maxing either Cooldown or Heat Gen requires an investment of around 28 nodes, proceeding to max both of those skill types only requires 11 additional nodes. This works toward the goal of a greater degree of give and take within the skill system through specialization.

This system aims to make the leveling process rewarding for the average player by having skill advancement and 'Mech leveling come at a much steadier rate, with more noticeable steps along the way, thus providing a greater sense of accomplishment and progress as they advance to fully master their 'Mech.

To purchase a Skill Node the player first needs to acquire a Skill Point (SP) using a combination of C-Bills and XP. If you have any "legacy" SP from your Refund Ledger, in the form of GSP or HSP, you can use those instead of spending any C-Bills or XP.

To purchase Skill Points for your current 'Mech click the "Add SP" button located inside the 'Mech Enhancements window. 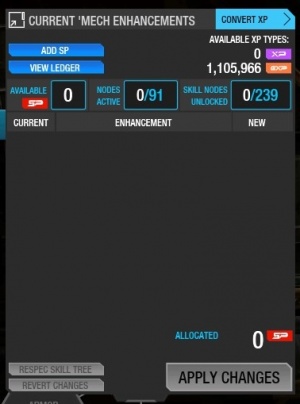 When a skill node is purchased with a Skill Point it is immediately unlocked and activated, and is considered owned. Once owned you can deactivate and reactivate skill nodes at your discretion. There is no cost associated with deactivating or reactivating a skill node.

While the layout and content of Skill Trees are identical between Clan and Inner Sphere 'Mechs (and between weight classes), there are minor differences in the values used for certain Skill Nodes. The 'Mech used for the purposes of demonstration in the pages linked below is the Warhammer, an Inner Sphere Heavy 'Mech. Any differences in Skill Node values will be displayed when applicable.

There are seven skill classes:

Skill Trees are accessed per-'Mech within the MechLab. Upon entering MechLab and clicking the Skills button from the list of MechLab options on the left of your screen you will be taken to the Skill Tree for the player's selected 'Mech. In the image below is an example of this, with some of the elements of the Skill Tree interface highlighted and defined.

How to Navigate the Skill Tree: 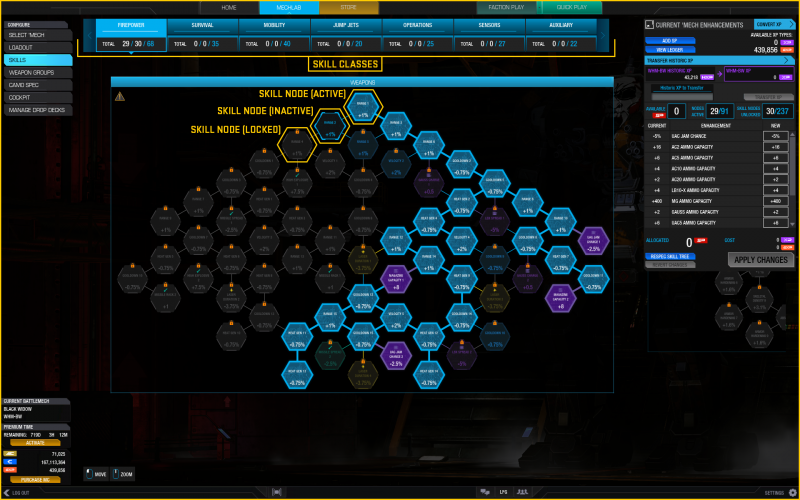 The 'Mech Enhancements window contains everything the player needs for tracking their currently-applied Skills, their total number of unlocked Skills, their current experience values, and any pending purchase details within the Skill Tree. Purchasing Skill Points, performing a full Skill Respec, converting 'Mech XP, and transferring any available HXP are also conducted through buttons located in the 'Mech Enhancements window.

In the example below, the player has already purchased a total of 36 Skill Nodes for this 'Mech, 35 of which are currently Active or pending purchase. They are are now evaluating the purchase of six Nodes in the Auxiliary tree to increase their allotment of Consumable Slots and improve the capabilities of their UAV. 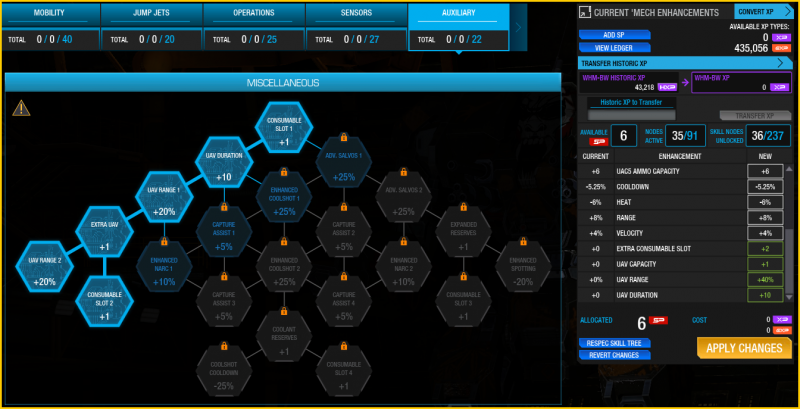 With the individual variant structure of accumulating and applying 'Mech XP under the Skill Tree, trial 'Mechs do not accumulate banked XP while being used. 48,000 GXP is provided when achieving Cadet Bonus 25.

Transition from Prior Skill/Module System

The Refund Ledger outlines all pertinent details of the transition and refund of each player's 'Mech and Pilot Skills, experience, 'Mech Modules, and Consumables prior to the May 2017 transition to the Skill Tree. Intent is to ensure that none of any player's skill progress is lost and that your existing module inventory has been accounted for.

Adapted from May-2017 patch notes