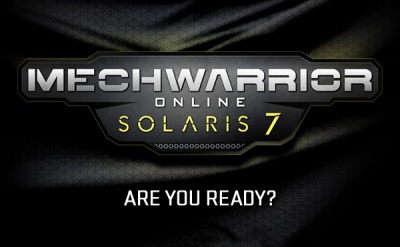 A competitive 1v1 and 2v2 arena expansion for MWO.

Solaris is an Elo-ranked competitive mode pitting MechWarriors against each other in fierce 1v1 and 2v2 combat that takes place within exclusive Solaris-only arenas. Any player can participate in Solaris. Choose your division, sign with a Patron, and compete in the Solaris games for accolades, sponsors and unique rewards. Become the ultimate Solaris champion this season!

Every season starts with the Solaris Oversight Committee dividing every known 'Mech variant into seven divisions. Each division is based on a number of properties ranging from loadout and profiles to flat out battlefield viability. Every MechWarrior has the choice to participate in whichever division they want to as each division has its own leaderboard.

The current Solaris 7 'Mech divisions can be found here.

A Solaris games season lasts for 3 months. At the end of a season, the best performaing MechWarriors are rewarded and all stats are backed up in the Solaris archives. 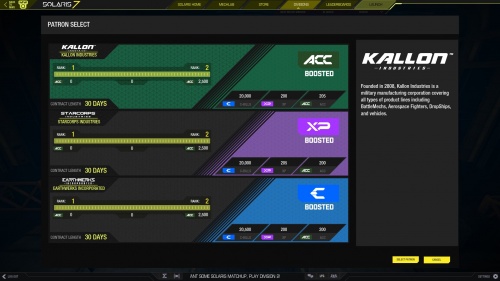 Get paid and move your career forward through your patron.

BattleMech combat is serious business. Along with the serious combat experience comes serious expenses. This is where patrons come into play. Patrons take on contracts with all MechWarriors participating in the Solaris games. Different patrons provide different payment structures with grow over the course of a season.

Patrons aren't the only ones providing a source of income during the games. MechWarriors also have the ability to gain sponsors throughout their seasonal run. Unlike contracted patrons, sponsors can be gained and lost and their loyalty completely depends on a MechWarrior's skill on the battlefield.

One unusual aspect of a Solaris tuned BattleMech is its outward appearance. Solaris is home to 'Mechs that have unique bolt-on cosmetic equipment. Patrons are the primary means of gaining these bolt-on cosmetics, which are awarded to MechWarriors each time they rank up in a division. These bolt-ons are awarded either directly or through supply caches that also contain a variety of other rewards.