What is a Mech

BattleMech production began in the 25th century and continued with lightning pace until the collapse of the Star League. By the year 3050 few in the Inner Sphere understand the process of constructing new BattleMechs. Most have been handed down through the centuries, maintained and repaired with whatever tech is available.

BattleMechs typically weigh between 20 and 100 tons, and fall into one of four weight classes: Light, Medium, Heavy, and Assault. Basic assumptions dictate that Light Mechs are quick, nimble, and lightly armored, while heavier 'Mechs have more room for equipment and armor. Light 'Mechs use speed to hide from detection while scouting ahead and employing hit-and-run tactics. Medium and Heavy 'Mechs are the most versatile classes overall, with Mediums slightly favoring speed over the firepower of Heavy 'Mechs. Assault 'Mechs are unmatched in size and offset their ponderous mobility with room for monumental arrays of weapons.

Pilots use the MechLab to assemble, tune, and customize their 'Mechs. Equipment and armor is mounted to individual components, each with their own hardpoints that determine which types of equipment it can accommodate. Selecting a 'Mech with the proper hardpoint configuration is the first step toward identifying builds that are viable for a given role. Soft restrictions like heat generation and ammunition capacity require experimentation to balance and tune. 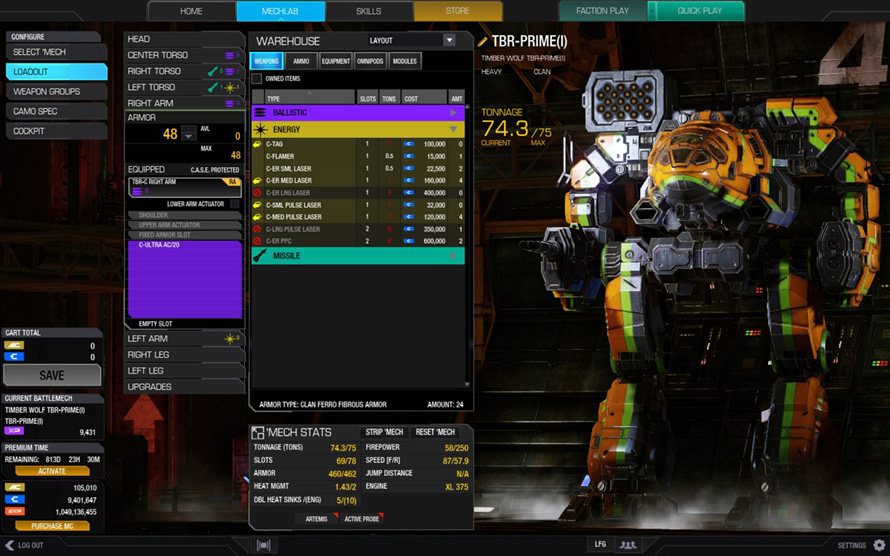 Bring to bear an array of close and long-range weapons, each with their own advantages on the battlefield.

'Mechs can mount a wide assortment of equipment to assist themselves and others.